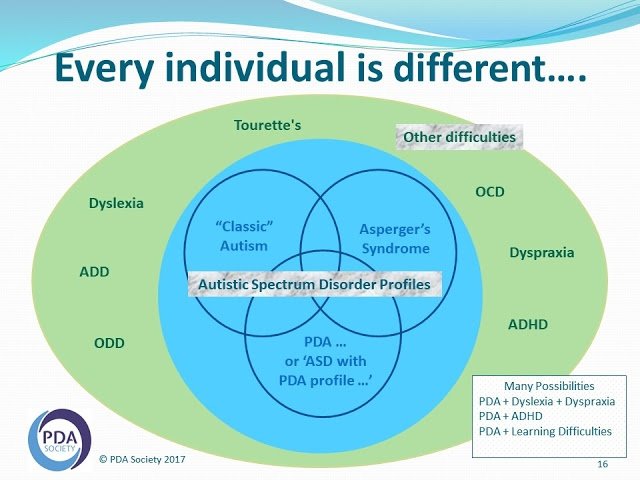 Currently there is some paperwork attached to my boiler with a natty magnet which says something about chunky dunking instead of skinny dipping! (Pretty appropriate these days 🙄)

The paperwork in question has been there for over a year now 😏, its the blood forms that our Paediatrician gave us for genetic testing on Ethan.

Now we initially agreed to take Ethan for these tests after his Autism diagnosis as we both realise that the more research done on Autism and the possibility of genetic links, the better for future generations.

However! The thought of taking him out of his comfort zone on so many levels has so far stopped me from booking him in at the hospital.

Dont get me wrong, I am intrigued to find out if there is any genetic link, especially as it could be a heads up for our children, if or when they themselves decide to reproduce!

The picture at the top of this post is a brilliant way of showing how various conditions may interlink, produced by the http://www.pdasociety.org.uk

We have always suspected ADHD in Ethan but he is too young for a diagnosis yet and looking at this I cant help but feel it may be my gene pool at work here as I myself have often been told that I suffer from OCD which, if I am 100% honest, I probably do!

My eldest suffered from intense motor ticks when younger and my 2nd was diagnosed with Tourettes Syndrome as she suffered both motor and vocal ticks when younger. (Note: at the ages of 21 and 17 now, you would never know they ever had these ticks unless you already knew and intensely watched them when extremely tired or stressed as they are now virtually non existent)

Daddy bird was diagnosed as a child with dyslexia and his neice of a similar age to my eldest was also diagnosed with Tourettes.

Now as Daddy Bird often says, if you look hard enough, you can probably find traits of at least one of these conditions in every human being, but slight traits dont impact on someones life the way that Ethans ASD/ PDA do or the way my daughters Tourettes did – One of her ticks was a cough which the teachers thought she was putting on for ages and told her off for it until the formal letter was put in front of them!

The Dr who diagnosed, explained that every tick would stop her hearing and seeing for that split second it happened, which meant that she could realistically be missing every other word or so that her teacher said on a bad day.

So I go back and forth wondering if I should take him for the tests.

Will it give us any more information?

Is it worth the anxiety for him?

Do we have a duty in the name of research?

Will it make any difference to our lives and more importantly, Ethans?

Mother of four, youngest ASD Pdaer. Home for every waif and stray of the animal world! View all posts by Mumma Birds Boy